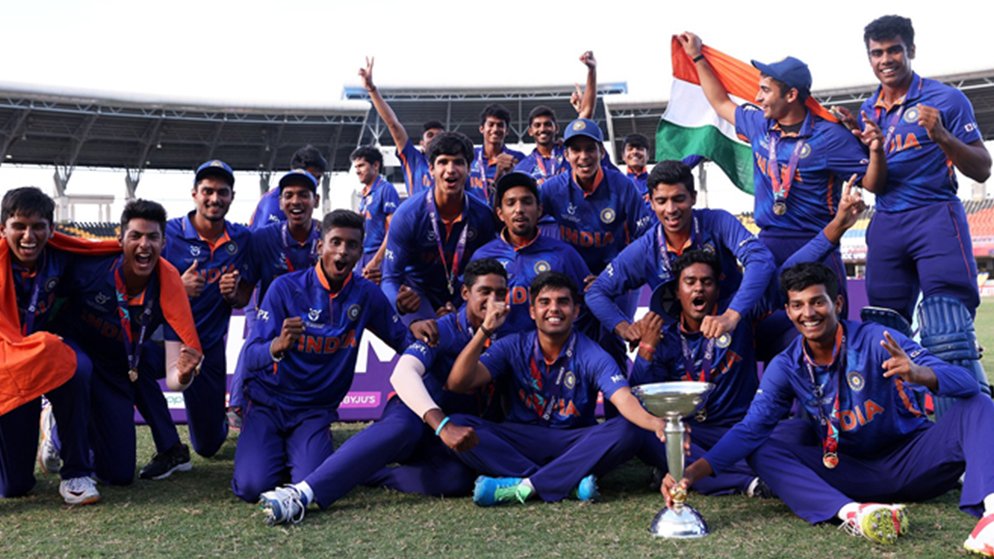 India has been crowned the U19 ICC Cricket World Cup yet again, and the BCCI has not fallen back in congratulating the players who have brought the coveted trophy home for the fifth time. A terrific Indian side led by Yash Dhull defeated England in the final of the competition to win the fifth U19 World Cup in the country’s history, on Saturday.

As soon as the news of the young Indian side winning the World Cup spread on social media platforms like wildfire, the BCCI took the opportunity to congratulate the entire U19 squad. The board also announced that it would award every single member of the winning U19 team a cash award of INR 40 lakh. The board has also recognized the work that the support staff has put in over the last few months to get the team to peak standards. In order to appreciate their work, the board has declared that every support staff member of the U19 squad will receive a cash award of INR 20 lakh.

The Indian U19 team, playing in the final against a strong English side, was helped in their quest to seal the 5th U19 World Cup crown for the country by a string of wonderful performances by both batsmen and bowlers. In the final match of the tournament, played at the Sir Vivian Richards Stadium in Antigua (West Indies), the Indian side showed a lot of grit and class to put down a spirited English team.

India’s U19 cricket captain, Yash Dhull, led his side to the field to chase the record of winning 5 U19 World Cups for the country in style. With England opting to bat first, all eyes were on the Indian bowlers. The Indian bowlers had done their homework very well it seems since they restricted England to a score of 190 only. The one bowler who made life very difficult for the English batsmen was Raj Bajwa. He took 5 wickets to shake the foundation of the English batting line-up.

In reply, the Indian batsmen were never hesitant in finishing the job of completing the chase of the target. With 14 deliveries still to be bowled, Indian batters crossed the finish line to emerge victoriously. During the chase, India had lost only 4 wickets and saw vice-captain Shaik Rasheed make a fantastic half-century. Rasheed was helped on the crease by fellow batsman Nishant Sindhu, who also made a brilliant half-century.

The good news for the whole Indian winning U19 team and support staff were made public when BCCI Secretary Jay Shah used social media as the suitable medium to declare the monetary prizes for players and support staff. He said on the post, “I’m pleased to announce the reward of INR 40 Lakhs per player and 25 Lakhs per support staff for the U19 #TeamIndia contingent for their exemplary performance in #U19CWWCFinal. You have made India proud.”

Secretary Shah also made it a point to mention the difficulties through which the Indian players and support staff members had to go through during the preparatory stages because of the current pandemic crisis. It was mainly during the group stages of the competition that the Indian team was facing a lot of challenges. The U19 captain Yash Dhull, and the vice-captain Shaik Rasheed, both had been sidelined for two games after they tested positive for Covid-19. The stand-in skipper, Nishant Sindhu, commandeered the team in the absence of the designated leaders of the team before himself being out due to Covis-19.  But despite all of that, the Indian brigade made their way out of all that and lifted the cup for the 5th time.

The Indian U19 team, on their way to grabbing the World Cup, did not lose a single match. They were in supreme form in the semi-final match against Australia, a game which they won by 95 runs. While making this announcement, the current BCCI President and former Indian cricket captain, Mr. Sourav Ganguly, remarked that the cash awards are a “small token of appreciation” for the tremendous amount of effort that the young players have given both on and off the field. He was happy to note that with this victory, the future of Indian cricket is looking brighter than ever.