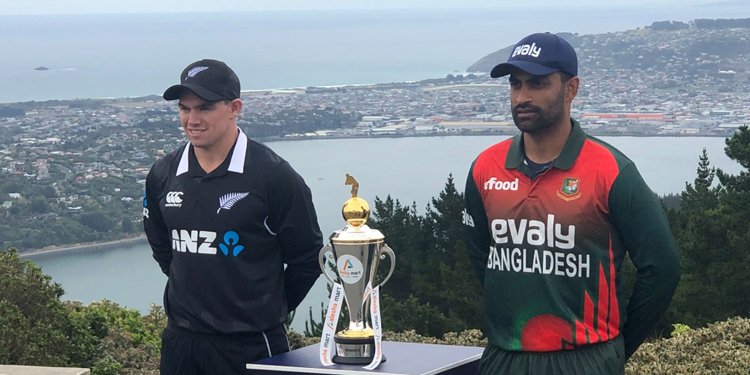 If one has to mention two teams that have shown unprecedented improvement in their performances in the past few years in international cricket, the names of Bangladesh and New Zealand would certainly crop up. Both the teams have been improving their cricketing performances for quite some time now.

Bangladesh has been having a good run as of recent as does New Zealand, which is the current Test Championship winner. Now, the two teams are set to face each other for a five-match T20I series that will played in September 2021. This is certainly going to excite the fans of both teams given their recent records and performances.

For New Zealand, the Bangladeshi wicket will definitely be a challenge. All the pitches in the subcontinent are known for favouring spinners and New Zealanders are generally used to windy conditions which favour swing bowling.  Let us have a look at the further details of this programme

Australia was not able to adapt well to the demands of the spinning, sluggish wicket at the Sher-e-Bangla National Stadium in Mirpur, Dhaka. Additionally, Bangladeshi bowlers played very well in the course of the series and were successful in taking wickets and stopping the flow of runs. On the other hand, New Zealand has also been performing very well. The most recent feat it has achieved is the victory in the World Test Championship, in which it won against India in June. Under the captaincy of Kane Williamson, New Zealand has been developing into a team that can no longer be considered underdogs. They are extremely competitive and are quite gentlemanly in their approach to the game in an age where most teams and players prefer wearing their hearts on their sleeves.

All the matches will be played at the Sher-e-Bangla National Stadium in Mirpur, Dhaka. It is not clear whether in-person attendance shall be played in the course of this series though. All the matches will be held between the 1st and the 10th of September. The first match will be played on the 1st, the second on the 3rd the third on the 5th; the fourth on the 8th and the fifth on the 10th of September, 2021. New Zealand is slated to arrive on the 24th of August, 2021 in New Zealand. They shall be playing a warm-up T20 on the 29th of August, 2021 before beginning the series finally.

This series will mark the beginning of multiple T20 tournaments. The second phase of the Indian Premier League shall be beginning in the United Arab Emirates nine days after the end of this series. That will be followed by the T20 World Cup, that shall also be held in the United Arab Emirates in October and November. This series will thus be vital practise for both the teams before they embark on their journey in the T20 World Cup.

The T20 World Cup is slated to be held between October 17 and November 14 in the United Arab Emirates and Oman. Bangladesh and New Zealand have played bilateral series on multiple occasions before. New Zealand will be touring Bangladesh after eight long years. The team had toured Bangladesh for the last time in 2013. This tour had comprised one T20I, three ODIs and two tests. New Zealand had won the T20I, Bangladesh won the ODI series while the test series was drawn. Before this tour, Bangladesh had met New Zealand for a limited-overs series in 2021. This was a part of the Bangladesh tour of New Zealand. The visitors were whitewashed in both the T20Is and the ODIs.

This time, Bangladesh will be eager to avenge their defeat in the limited-overs series. On the other hand, New Zealand will be trying to extend their dominance in all formats of the game in every way possible. While Bangladesh will have the benefit of playing in familiar conditions, New Zealand would have the confidence of being able to fight in spinning pitches given their current team. Although the details of the pitch reports or the squads have not been made available yet, one can certainly vouch that this is going to be a memorable T20I series in which good cricket will be played.