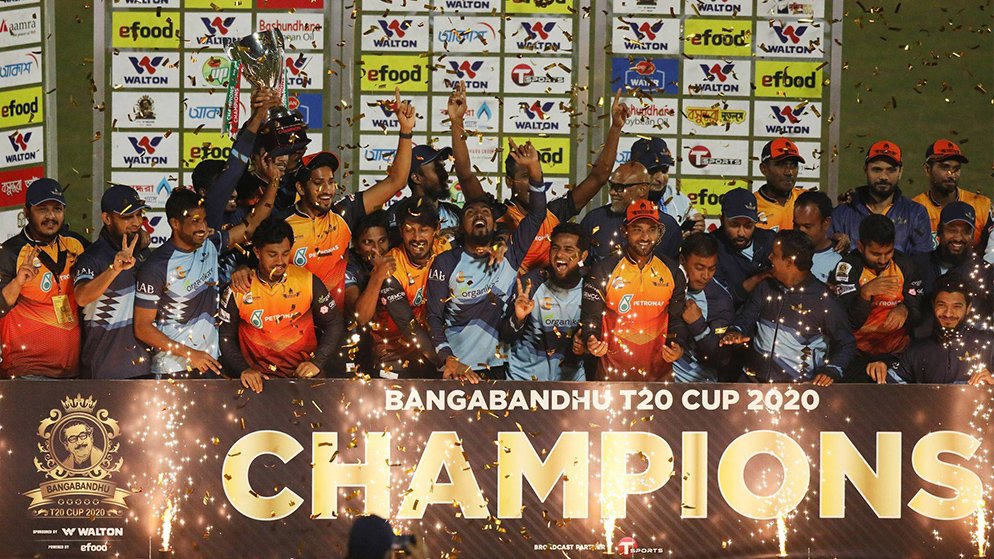 The Bangabandhu Bangladesh Premier League (BPL) has confirmed that a total of 6 franchises will be taking part in the premier event of the South Asian nation. The 2022 BPL will be the eighth time Bangladesh would be hosting its top T20 competition.

It is no secret that the popularity of T20 cricket is on the rise in various cricket-playing nations. It all goes back to the year 2007 when the ICC hosted the inaugural Men’s T20 World Cup. That competition was a grand success, and it directly influenced the birth of the Indian Premier League. Currently, we see many T20 leagues all across the planet. For example, the Big Bash League in Australia, the Sri Lanka Premier League in Sri Lanka, the Caribbean Premier League in the West Indies, etc., are some of the top T20 leagues.

Next season’s BPL would welcome three new owners into the fold. The team from the Dhaka division has been acquired by the company named Rupa and Marn Group. Progoti Group has got hold of the outfit from the Sylhet division. Finally, the team from the Khulna division will be operated by the MindTree Group.

Apart from these new holders, the BPL would be seeing the return of former two-time title winners Comilla Victorians in the 2022 edition. They did not take part in the seventh edition of the BPL. Their owners, the Lotus Group, have retained their control over the franchise. The fourth team that will be competing in the T20 league is the one from the Barisal division. This outlet has been under the control of the Fortune Group for the past few seasons. The same goes with the sixth and final team of this competition, the Chattogram division team. The owners of this team are the Akhtar Group.

It is worth noting here that three of the most popular outfits of the BPL, namely the Dhaka Dynamites, the Rangpur Riders, and the Khulna Titans, have collectively called off their participation from next year’s edition of the BPL. These outfits are owned by the Beximco Group, the Basundhara Group and the Gemcon Group, respectively. It has been learned that they had their differences with the governing council of the BPL with regards to the latter’s stance on signing one-year contracts with the franchises without consulting all the stakeholders.

The BPL governing council declared in a press release that in the 2022 edition of the Bangabandhu Bangladesh Premier League, each team would be able to name a maximum of 3 foreign players in the starting eleven. This is something that has not gone down well with the board members of some of the franchises. Until the seventh edition of the BPL, the governing council allowed 4 players of foreign origin in the starting line-up of each team. A sudden change in the policy will surely cause headaches in team camps. They would now have to change their game plan.

Speaking to the media after some consultation with the Bangladesh Cricket Board, the managing director of the Chattogram outfit, the Chattogram Challengers, had this to say- “Yes, you can say that we are confirmed by the board to take part in BPL. We came here to talk with BCB and they told us that we will be representing our Chattogram Challengers. In the last edition, there was a provision of playing four overseas players while in this edition three players for each franchise. The date for the draft is yet to be finalised and once it is finalised we would be more organised.”

BPL Clashing With PSL Not A Concern For BCB

The 2022 BPL will be played at the same time as that of the Pakistan Super League (PSL), and there is a growing concern among the franchises that it could hamper their chances of grabbing quality overseas recruits.

Talking about this development, the managing director of Chattogram Challengers, Mr KM Rifatuzzaman said, “You know that the players’ draft of PSL is taking place today, and after it is completed we can have a clear picture about the availability of the foreign players in the competition and can let you know who we are going to confirm.”

Meanwhile, the BCB is more worried about the rise in Covid-19 cases in the country and the potential impact it could have on the tournament. A member of the BPL governing council, Sheikh Sohel, reiterated the same when he faced reporters outside the BCB headquarters. He said, “We are not worried about the PSL and we are expecting to host the players draft of this month but the only thing that we are worried about is the corona situation.”

The 2022 Bangabandhu Bangladesh Premier League will begin on January 20 and continue until February 20. The PSL will start on January 20 and run almost parallel to the BPL. Cricket fans on both sides of the subcontinent should now wait and watch.