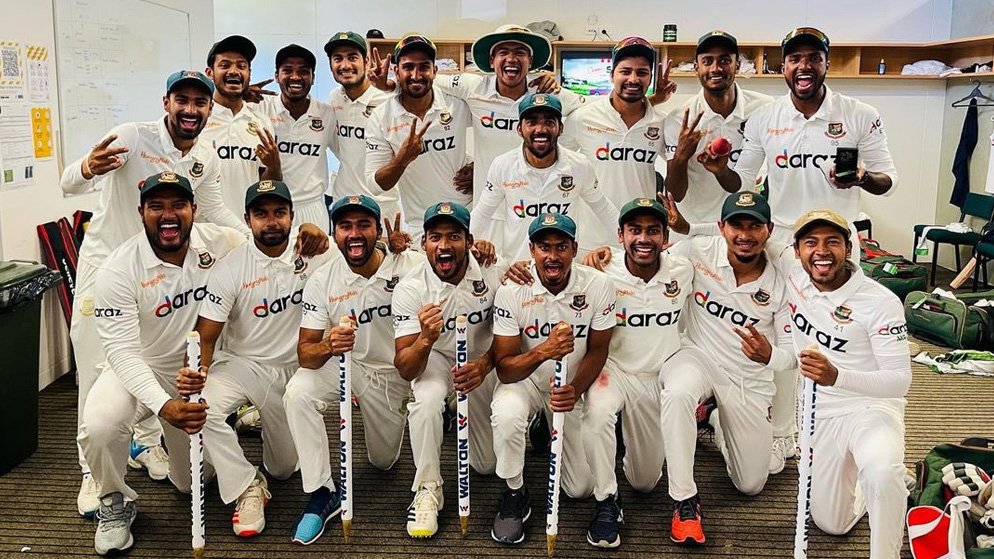 Bangladesh has certainly pulled off one of the greatest underdog victories in the history of Test cricket. They have managed to defeat the reigning World Test Champions New Zealand in their backyard in a splendid manner. This is the first time that Bangladesh has earned a victory over the Kiwis in Test cricket. With this win, the south Asian country has shattered New Zealand’s record of remaining unbeaten on home turf for 17 straight Test matches. The last time that New Zealand had lost a Test match at home was way back in 2017 when South Africa defeated the hosts in a match played in Wellington.

Bangladesh Put Up Strong Show From The Very Start

On their way toward causing this major upset in world cricket, the Bangladeshi players gave a befitting reply to all the doubters who had predicted that the Kiwis would find it too easy to compete against the visitors. In their first inning, Bangladesh had put up a magnificent score of 458. They surpassed the score that the Kiwis had set by 130 runs. Four of their batsmen had scored well-made half-centuries, to set Bangladesh up for a competitive match. Batters Mominul, Liton Das, Mahmudul Hasan Joy, and Najmul, with their respective scores of 88, 86, 78, and 64, respectively, had given the Bangladeshi side a solid grip over the match.

After New Zealand had put up a score of 328 on the scoreboard, very few would have guessed that Bangladesh would be cruising past such a high score. But this is exactly what conspired. Despite seeing themselves sail past the 300 run-mark, with Devon Conway reaching another century with 122 runs, the Kiwis could not pile up the pressure on the Bangladeshi batsmen.

It Was All Downhill For The Kiwis From The Second Inning

It was important for the Kiwi batsmen to make amends for the poor show of their bowlers. But as fate would have it, the Bangladeshi players were already on a high after scoring freely of much of their first inning. Reeling under a tremendous amount of pressure, the Kiwi batsmen capitulated after putting up a mere 169 runs on the board. This dismal second inning performance meant that Bangladesh had to chase only 40 odd runs to register their first victory ever over New Zealand in Test match cricket. The Bangladeshi batsmen did just that, reaching the target of 42 with the loss of two wickets in their second inning.

Hero Of The Match Ebadot Hossain All Smiles At Presentation Ceremony

The one Bangladeshi player who stood out from the rest was Ebadot Hossain. This Bangladeshi bowler, who is also an Air Force combatant, took 6 valuable wickets in the second inning to rattle the New Zealand batting line-up. With figures of 6/46, Hossain was the chief reason why the Kiwis collapsed at only 169 in their second inning. He destroyed the Kiwi top order on Day 4 and continued terrorizing them after uprooting Ross Taylor’s stumps when the latter was looking good on 40. While receiving his man-of-the-match award at the post-match presentation ceremony, a beaming Ebadot Hossain remarked, “It’s a long journey, volleyball to cricket… I’m enjoying cricket now.”

From 147 for the loss of 5 wickets, the Kiwis were quickly down to 7 wickets, thanks to two quick wickets taken by the main man, Hossain. New Zealand could never recover once Hossain had sent back Kyle Jamieson on a duck, followed by compatriot Taskin Ahmed getting rid of all-rounder Rachin Ravindra.

Once the New Zealand tail end was taken care of by Tskin Ahmed and others, it was the task of the Bangladeshi batsmen to chase down the target of 42 and write their names in the history books. In this endeavor, there were early signs of nervousness when opener Shadman Islam gave away his wicket at the very start of the second inning. However, the Bangladeshi second inning was given poise by the experienced hands of skipper Mominul Haque and his partner, Najmul Haque. Together, they took their side close to victory, with Mushfiqur Rahim coming on to the crease to seal the deal.

New Zealand Looking At Comeback In The Second Test

Now that the dust has settled on the historic first Test at Mount Maunganui, the two teams would be heading over to Christchurch to play in the second Test match. The second Test, which starts on Sunday, January 9, 2022, would most likely determine the outcome of the series. With Bangladesh gaining a lead in the 2-match Test series, all eyes would be on the second and last Test of this series. New Zealand would be looking for some redemption following their shock loss at the hands of minnows. With the chance of winning the series now gone, they would be hoping to halt the sudden Bangladeshi surge by giving their all. We expect nothing less than another entertaining showdown between the sides.