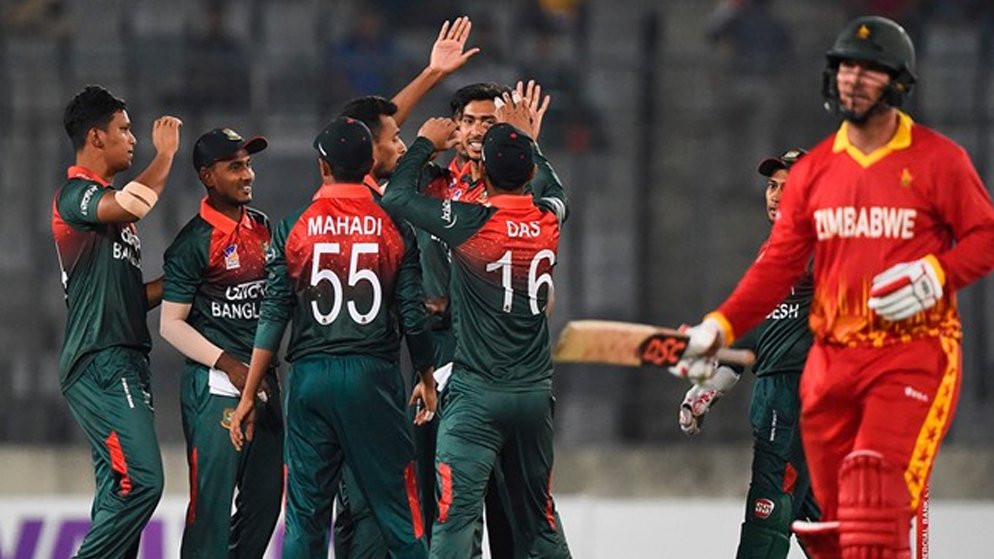 Bangladesh Cricket Board (BCB) announced their traveling squad that will be touring Zimbabwe in July. The Tigers will be playing a full series that will include all three formats. The month-long tour will see a one-off test, three one-day internationals, and three twenty-over matches.

Zimbabwe sporting authorities who have put an indefinite halt to all kinds of recreational and sporting activities in their country due to increasing Covid-19 cases are taking a big step in inviting the Bangladeshi cricketers for a contest.

The one-off test will be played at Queens Sports Club in Bulawayo and the rest of the games will be hosted in Harare Sports Club. The Test will continue from 7th July to 11th July. The ODI’s will be played from 16th to 20th July and the T20s to be played between 23rd to 27th of July. A month-long series that will have the Bangladeshi and Zimbabwean cricket fans attention. To ease out situations for both teams there will be a practice match between the sides on July 3th-4th, ahead of the one-off test match.

Before this, the Tigers played with Sri Lanka, who toured Bangladesh in May. The 3-match ODI series was entirely dominated by Bangladesh as they strengthened their position in the ICC Men’s World Cup Super League. Bangladesh has climbed to the first position in the table registering 5 wins and 4 losses in all the 9 matches they have played. The Tigers have relatively maintained a good composure in ODI matches played at home. However, their ODI record on foreign soil has been pretty woeful. Their last foreign encounter was in New Zealand, where the Kiwis whitewashed Bangladesh in all the limited-over formats.

Bangladesh’s Squad For The Tour

This time Bangladesh would be confident to keep their form intact and will be a tough nut to crack for the Zimbabwe team. Shakib Al Hasan has been named in the squad for T20 and ODIs after serving a 3-match ban due to his unruly on-field behavior in the Dhaka Premier League. Shamim Hossain, who had a pretty good run in Dhaka Premier League, earned his maiden call up in the squad for the T20 series. The  20-year old left-handed batsman will be the youngest addition to the 16-member T20 squad traveling to Zimbabwe. The new kid in the block seems to be a massive contender for the role of a finisher in the twenty-over format. Hossain can come in handy as an off-spinner who can make things difficult for the opposition’s batting line-up and has also been considered as one of the best fielders in the Dhaka Premier League.

Shamim might earn himself a debut in one of the three T20’s against Zimbabwe if the conditions favor Bangladesh.

Rubel Hossain, Al Amin Hossain, and Hasan Mahmud are the ones who are missing from the T20 squad. These three players have previously featured in the Bangladesh tour of New Zealand, which turned out to be a big embarrassment for the team.

The right-handed wicketkeeper-batsman Mushfiqur Rahim has failed to find a spot in the T20 squad in the tour. Although the senior player has been featured in the ODI and Test squad; Nurul Hasan Sohan is most likely to fill his boots in T20. Nurul Hasan Sohan who has had a good run of games in the Dakha Premier League has been recalled for all three formats.

Squad For Bangladesh Tour of Zimbabwe, 2021

Zimbabwe has failed to register a win in any of the three formats since October 2019. Their last win came off in their Singapore Tri-Nation series in 2019. This opens a lot of vantage points for Bangladesh who have also previously played this opposition in 2020. Bangladesh emerged as the eventual winners of the series beating Zimbabwe in both the limited-overs formats.

Bangladesh will go full-throttle into this tour, taking advantage of Zimbabwe’s vulnerability. This will prove to be an important tour as a win will drum up Bangladesh’s confidence while playing on foreign soil.