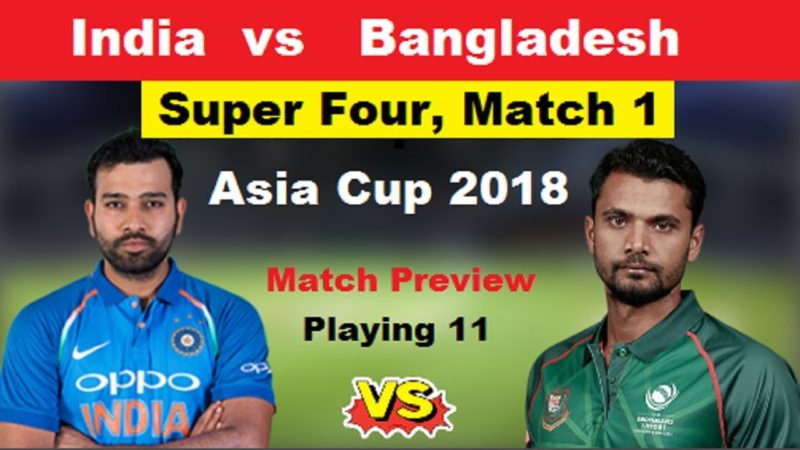 Asia Cup 2018, Super 4 Preview: India vs Bangladesh – The second round of Asia Cup 2018 will commence on Friday, September 21 when India will take on Bangladesh in the first fixture of Super Four at the Dubai International Cricket Stadium.

Both teams have played 32 ODIs against each other with the Indians comprehensively leading the scoreline 27-5.

In their most recent ODI clash, India outplayed Bangladesh by nine wickets. It was the semi-final game of the ICC Champions Trophy played at Birmingham in 2017. Bangladesh were put into bat first and went on to score 264/7 in 50 overs before India cantered to their target inside 41 overs

After a not so convincing performance against Hong Kong in their first game of the tournament, India silenced their critics with a flawless victory over Pakistan on Wednesday. They outclassed their opponent in all departments of the game and will now go into this match riding high on confidence. They also have the benefit of having played their previous two matches at Dubai International Stadium. This means that India won’t be needing much time to adjust to the conditions and will have a much better idea about the nature of the pitch.

Batting : Shikhar Dhawan has been in good form in Asian conditions. The left-handed batsman cracked a ton against Hong Kong and then followed that up with a decent 46 against Pakistan, while his opening partner and skipper Rohit Sharma too made a valuable contribution of 52 and both these batsmen will once again hold the key to India’s batting.

Among others, Ambati Rayudu has hit 91 runs in two matches while Dinesh Karthik has also looked promising in his respective knocks of 33 and 31. Both these batsmen along with MS Dhoni form a formidable middle order and are capable to making the opposition bowlers surrender.

Bowling : Bhuvneshwar Kumar and Kedar Jadhav were the star performers with the ball against Pakistan. Both snared three wickets apiece and the team will want these two to continue to crack some wickets upfront.

Jasprit Bumrah too finished with impressive figures of 2-23 against the arch-rivals and he could hurt the Tigers with the new ball. In the absence of Hardik Pandya, the team will also bank on the the likes of Ravindra Jadeja, Kuldeep Yadav and Yuzvendra Chahal to fill up his duties and demolish the opposition with their variations.

Without Tamim, the Tigers failed to transfer their momentum from their previous game and suffered a humiliating defeat against Afghanistan in their second game. They were outplayed in all three facets of the game and were not able to push the Afghans at all. They will have a lot of things to look after and sort out in a span of a few hours to get ready for the ultimate clash.

Mushfiqur Rahim (144) and Mithun (63) played a key role in the tournament opener against Sri Lanka and the team will need these two to replicate that performance.

Bowling : Mashrafe Mortaza and Mustafizur Rahman are the main threats in Bangladesh’s pace attack. These two have been among the most successful bowlers in ODIs for their nation and it will be up to them to provide the early breakthroughs and set platforms for others to follow.

Shakib Al Hasan and debutant Abu Hider were the only positives for the Tigers against the Afghans. Shakib was the pick of the lot with 4/42 while Hider also impressed everyone with his variations and ended up with figures of 2/50 in his maiden outing and the skipper will need these two to replicate it against India.