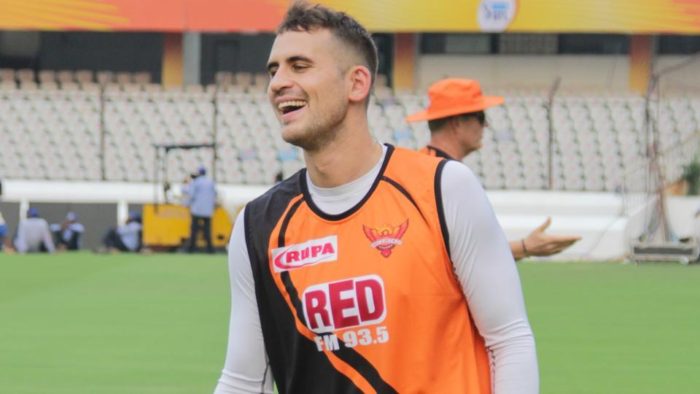 Sunrisers Hyderabad were quite used to the explosive starts from David Warner in the yesteryears. He was their best batsman, not just taking them off to ballistic starts but also covering up for some fragility in the middle-order.

So when it was confirmed that he will not be part of IPL 2018, the Orange Army were already on the backfoot thinking of ways to deal with this massive setback.

The signing of Alex Hales was brainy, but he was not featuring in the starting eleven owing to team combination. Wriddhiman Saha, Ricky Bhui, Kane Williamson – all had a go, but 6, 32, 14, 0, 20, 1 were the returns in the name of opening partnerships in six out of seven games. On Saturday (May 5), Hales finally got his maiden game and he proved why he should be their regular choice, through a blitz in SRH’s victorious campaign against Delhi Daredevils.

In pursuit of a competitive 164, Sunrisers needed a good beginning. The pitch wasn’t batsman-friendly and runs had to be scored when the ball was new and coming on better. The England and Middlesex batsman got stuck into the promising pacer Avesh Khan, whose ploy seemed to be to hit the deck hard. But his radar wasn’t great and the pitch did not have enough bounce to trouble a batsman with bouncers.

However, the short ball ploy almost worked as Hales miscued a pull high in the air, only for Glenn Maxwell to grass it at deep midwicket. Avesh was tempted to continue the steepler theory. However, the former number one T20I batsman was street-smart with his shuffle in the crease, not allowing the bowlers to bowl in the areas they wanted to.

When Avesh bowled short he played the pull over mid-wicket, when it was full, mid-off was the target, when the bouncer was tried again, he made room and slashed the ball over the off-side. He smashed three sixes in what was eventually a momentum-changing 27-run over. These were the kind of overs Warner used to muster. That Hales was able to emulate it was a big boost for SRH.

“I move around (in the crease) to put the bowlers off their lengths an it’s something I’ve worked on behind the scenes. Sometimes I do stand still and look to clear the infield, need to make the most when only two fielders are inside the ring,” Hales said after his impressive 31-ball 45.

“It was good to be playing, had to wait for my chance. Had to make sure that I worked hard and be ready for the moment. Got a bit of luck, dropped by Maxi. Had to do well in the powerplay, it was a pretty decent wicket with the new ball,” the opener added further.

Hales’ power-hitting took a lot of pressure off captain Kane Williamson, who has had to do the bulk of the scoring for SRH this season. A flying start meant Williamson could hold one tight as always and took the game deep, before Yusuf Pathan’s cameo got them over the line.

With the middle-order recruits not exactly firing, going forward, it is absolutely vital for the Sunrisers that the openers get starts and let Williamson bat with a bit more freedom. Hales succeeding in successive games and being a right-hander perfectly compliments Shikhar Dhawan and allows SRH to field a solid left-right combo at the top.