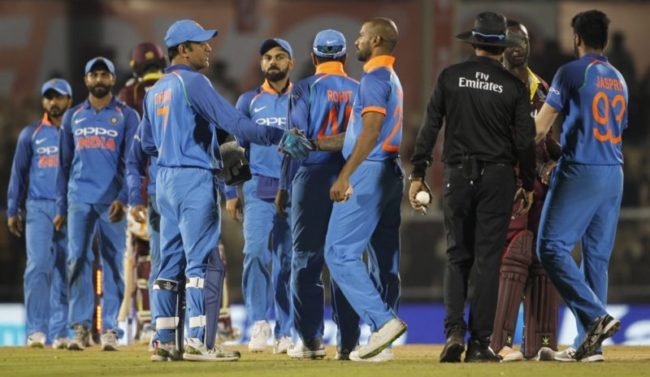 Mumbai, Oct 29 – India dished out a clinical performance to outclass the West Indies by 224 runs, their biggest margin of victory against the Caribbean side, in the fourth One-day International (ODI) on their return to the Brabourne Stadium here on Monday.

The victory is India’s third biggest by margin of runs against any side. With the win, India also took a 2-1 lead in the five-match rubber with one match having been drawn.

After posting a massive 377/5, thanks to centuries from Rohit Sharma (162) and Ambati Rayudu (100), the home side relied on a disciplined bowling effort led by the rookie left-arm quick Khaleel Ahmed (3/13) and chinaman Kuleep Yadav (3/42) sharing six wickets between them, to skittle the tourists for a meagre 153 in 36.2 overs.

Facing a daunting target, the Windies never looked in the hunt with Khaleel ripping through the middle order, comprising Marlon Samuels (18), Shimron Hetmyer (13) and Rovman Powell (1) after the top three departed with mere 20 runs on the board.

Earlier, Bhuvneshwar drew first blood for the hosts with the wicket of opener Chandrapaul Hemraj (14), before a couple of run-outs of Kieran Powell (4) and the in-form Shai Hope (0) further derailed the chase.