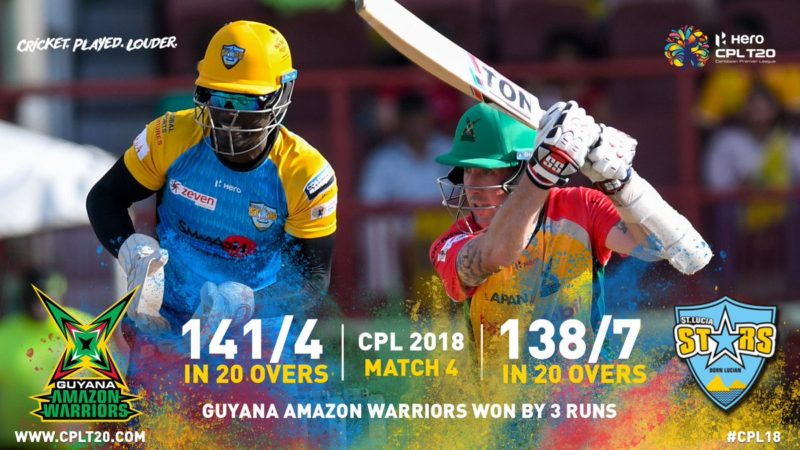 Guyana Amazon Warriors preserved their unbeaten start to CPL 2018 in improbable circumstances in a three-run win over St Lucia Stars at Providence Stadium. The visitors found new ways to maintain their incredible streak of futility since ditching the Zouks moniker at the start of 2017, frittering away an almost-certain victory from a position of 113 for 2, chasing 142.

Amazon Warriors’ openers sped their way to a half-century stand in just 5.4 overs to give the hosts a superb platform. Chadwick Walton, in particular, was creative with his punishment, following up his first three boundaries with a scooped six over fine leg off Mohammad Sami to start the fifth over. The pair eventually added 54 in seven overs before Stars turned to spin to shift the momentum.

Legspinners have made a habit of striking on the first ball of their spells during this CPL, from Australia’s Fawad Ahmed to Nepal’s Sandeep Lamichhane. Afghanistan teenager Qais Ahmad followed in their footsteps at Providence on Saturday afternoon, beating Walton in flight after coming on in the eighth over to have the Jamaican stumped for 31.

Shimron Hetmyer, who produced a sparkling half-century a few nights earlier in Warriors’ win over St Kitts & Nevis Patriots, was the next to fall to Qais. A thick edge on an attempted cut was held after a juggle by Andre Fletcher in the 12th over. The Afghan’s third and best of the night came in his next over when he beat Shoaib Malik through the gate with a googly as the Warriors had been cooled down by the end of Qais’ haul from 54 for 0 to 98 for 3.

Duguid, the bad and the ugly

Umpire Nigel Duguid had a night to forget, standing out in the wrong way for a pair of lbw decisions. The first came late in the Warriors’ innings. Ronchi was holding firm on a sluggish wicket in spite of the damage done by Qais and was on 42 off 40 balls on the last delivery of the 16th over. Mark Chapman, who had been brought on to bowl for the first time of the night with his left-arm spin as Stars’ eighth bowler of the night, speared a skiddy delivery into Ronchi’s legs on a good length. The ball went straight on past Ronchi’s pull and looked to be clearly going down leg stump but Chapman’s appeal was upheld. With the anchor lifted, Warriors only scored two boundaries off the final four overs to claw to 141.

A far more egregious error was made early in the Stars’ chase. A conservative start by Fletcher and David Warner saw them crawl to 28 for 0 at the end of the Powerplay. Imran Tahir came on for the seventh over and after a single by Fletcher, Warner got a full toss that he attempted to reverse sweep behind point. He edged the ball onto his glove as the ball trickled toward point with Ronchi more concerned about chasing after the ball to deny a single than supporting Tahir’s appeal.

A stunned Warner then saw Tahir sprinting away toward the boundary as Duguid upheld the appeal. Not only had the ball never come close to striking Warner’s pad, but the impact with his gloves appeared to be outside off stump as well with the ball’s trajectory projected to carry well past off stump. The decision was compounded later in the over, when Tahir struck to trap Fletcher lbw, a straightforward decision, with a googly to leave Stars at 30 for 2.

Lendl Simmons bashed five sixes after coming in at first drop to give the Stars a much-needed boost in the middle order. The Stars’ winless streak looked certain to end at 12 when Sherfane Rutherford spilled Simmons off a regulation chance on the cover boundary in the 16th off Sohail Tanvir and two balls later Simmons ended the over with a six to bring the equation down to 34 off four overs with eight wickets in hand.

Yet The Curse of the Zouks is looking very very real for the Stars, having given away the match from that position. Rayad Emrit’s spell in the death snuffed out the Stars, beginning with the wicket of Simmons three balls into the 17th slashing an edge behind. Chapman’s charge down the pitch to Chris Green’s offspin failed on the first ball of the 18th as Pollard and Rahkeem Cornwall could manage just three singles off the rest of the over to leave 23 off the last two overs.

Emrit found himself on a hat-trick four balls into the 19th when Pollard sliced Emrit to Jason Mohammed at extra cover and Cornwall was cleaned up by a yorker. Qais slugged the final ball for six over midwicket to leave 16 off the last over to win. Keemo Paul then yorked Kavem Hodge off the first ball to put Stars seven down before Mitchell McClenaghan scooped a six off his first ball over fine leg to make it 10 off four. Two, one, two off the next three balls left Qais with a four to tie or six to win off the last ball. Paul fed him a thigh-high full toss on a middle-stump silver platter, but Qais flubbed it to long-off for a single, taking Stars’ winless streak to a baker’s dozen.