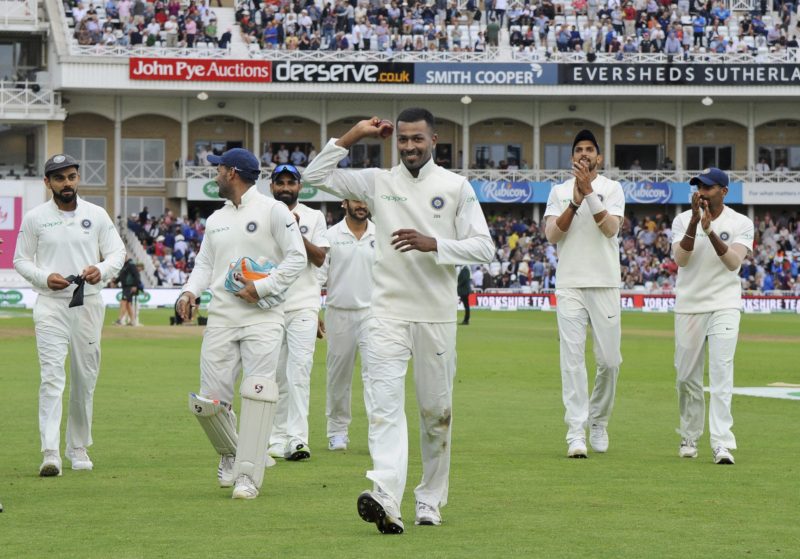 Cheteshwar Pujara (33) and Skipper Virat Kohli (8) were at the crease when umpires dislodged the bails for the day.

For England, Adil Rashid and Ben Stokes chipped in one wicket each in the last session. The day started with England bowlers wrapping up India’s first innings for 329 just before the lunch.

Resuming the second day at 307 for six, India’s lower-order batsmen — Ravichandran Ashwin (14) Ishant Sharma (1 not out), Mohammed Shami(3) and Jasprit Bumrah (0) — failed to make any substantial contribution to the score.

Overnight batsmen Rishabh Pant only managed to add just two runs to his score before going back to the pavilion.

Coming into bat, England started their innings steadly. The hosts were 46/0, trailing by 283 runs at lunch. England openers Alastair Cook Aand Keaton Jennings applied themselves handsomely and made sure they went for lunch without losing any wicket.

But after lunch, England struggled as Indian bolwers bounced back in style. Hardik Pandya’s 5/28 broke the back of English batting line-up as the hosts were bundled out for 161 in their first innings.

India rode on a brilliant bowling display as the entire England batsmen were wrapped after they added just 115 runs in the second session of the second day.

After a decent start, as England were 46 for no loss at lunch, the Indian bowlers came all guns blazing to hand their side a 168-run lead after India’s first Inning score of 329.

Apart from Pandya, pacers Ishant Sharma and Jasprit Bumrah scalped couple of wickets each conceding 32 and 37 runs respectively while Mohammed Shami bagged one.

Jos Buttler was the top scorer for the hosts with his 39 runs while openers Alastair Cook and Keaton Jennings chipped in with 29 and 20 runs respectively.

The final session saw Indian batsmen swelling their overall lead. Openers Shikhar Dhawan (44) and Lokesh Rahul (36) gave the steady start. But just when things seemed good in the middle Rahul was sent back to the pavilion. He was clean-bowled by Ben Stokes.

Soon, after adding 61 runs with Pujara, Dhawan was also dismissed by spinner Adil Rashid when scoreboard was reading 111.

But Kohli and Pujara then played sensibly and without losing their wickets and ended the day by swelling their lead.